Ahead of Royal Northern Sinfonia’s performance of Philip Glass’ Bowie Symphonies, music journalist Dave Simpson spoke with conductor Robert Ames about the music of the time and his role in the exchange between classical and contemporary music.

When Robert Ames was a child in Northamptonshire, his father would play a wide variety of music in the car during the school run. “A combination of classical music and prog rock, or electronic music such as Tangerine Dream,” Ames remembers. “It was a great education.” Over 20 years later, aged 36, the same sort of multi-genre collage of sound is fundamental to what he does in music.

As a conductor, composer and arranger, Ames is a key agent in the ongoing conversation between classical and contemporary music. He works with leading minimalist composers such as Steve Reich and Terry Riley as well as artists such as Bryce Dessner, composer as well as guitarist with the band The National, and Radiohead’s Jonny Greenwood. 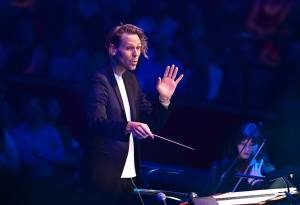 Ames works with many of the world’s leading orchestras. He’s collaborated with Beck, Sigur Ros, Goldfrapp, Frank Ocean, Little Simz and Taylor Swift. He has also made two albums [2021’s Change ringing and 2022’s CARBS] as an artist.

His work is a microcosm of the way we now listen to music. Where it was once tribal – people might listen to punk or disco, rarely both – the Napster and Spotify generation have grown up with the ability to pick and mix, and compile personal playlists which leap from genre to genre. As Ames puts it, “We can all listen to Rival Sons next to a beautiful piece of neo-classical music. A band such as Radiohead are massively influenced by the new electronic scene. There’s no barriers or judgement anymore. That’s been one of the biggest changes in music over my life.”

One constant in his life has been the music of Philip Glass, whose 1982 film soundtrack Koyaanisqatchi was one of Ames’ earliest musical listening experiences.

In 2019, he conducted the European premiere of Lodger – the third of Glass’ symphonies based on David Bowie’s “Berlin trilogy” – with the composer in the room. His background makes Ames a perfect conductor for Sage Gateshead’s presentation of Low and Heroes, legendary composer Glass’ first two symphonies based upon the music of David Bowie and Brian Eno. This music has been at the heart of the widening cross-pollination between musical genres down the decades.

On its release in 1977, Bowie’s Low was a revolutionary album, which tore up the idea of the artist as a “pop star” and combined contemporary pop with synthesiser and electronic instrumentals. Although it charted at No. 2 and contained the hit single Sound And Vision, the album startled fans reared on Ziggy Stardust, while few critics understood it. “Who needs this shit?” asked NME’s Charles Shaad Murray, in a notoriously negative review.

However, the album has since become considered as perhaps Bowie’s most significant work of all. “There isn’t a note that has aged since 1977,” declared Billboard in 2016. “It seems to exist almost entirely apart from time. Low’s impact wouldn’t be felt for a generation – it wasn’t until Radiohead’s Kid A that rock and electronic would once again meet and move forward in such a mature fashion.” 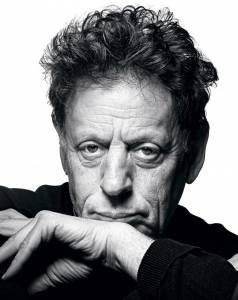 Glass initially took this musical conversation further in 1992, basing his Symphony No. 1 (Low) on the album and describing it as “a symphonic homage to a very important record [which] went beyond the niceties and categories of pop music, and pointed in a different direction.” In 1996, the composer’s Symphony No. 4’s six symphonic movements of shimmering cellos, brass, violins and arpeggiated flutes drew on melodic phrases from Bowie’s Heroes, the second 1977 rock/electronic album recorded with Brian Eno in Berlin.

For Ames, the Low and Heroes symphonies he will conduct at Sage Gateshead are “fascinating early examples of a contemporary classical composer taking the work of a such an iconic artist from popular culture and making incredible music in its own right. The amount of people listening to Philip Glass is nowhere near the amount listening to Bowie, so it was an incredibly brave thing to do. I love the fact that he wasn’t afraid to take those risks, and that it came from a massive love and respect for Bowie’s music.”

“It never was a one-way conversation: the three artists influenced each other all along”

In fact, Ames sees the symphonies as an ongoing musical conversation between Glass, Bowie, and Eno, “three kindred spirits doing their thing at a ridiculously high level”. Similarly, just as Low and Heroes allowed Bowie to redefine himself as an artist and Eno (who’d started in Roxy Music) to further his reputation as an electronic pioneer, Glass was able to show that he could no longer be defined simply as a “minimalist composer”. It never was a one-way conversation: the three artists influenced each other all along. Unbeknown to Glass or each other, Bowie and Eno both attended the composer’s first UK concert at the Royal College of Art, in 1971, a time when minimalist or avant garde composers were unwelcome in classical venues. Just as Glass’ work had informed Low and Heroes, he took the exchange further, to the delight of Bowie and Eno. “They had a shared language between them, even though what they were doing was very different,” enthuses Ames. “The symphonies have a very different sound to anything else Philip has done.”

Ames first conducted them (with the third, Lodger) as co-artistic director of the London Contemporary Orchestra in 2019, but expects this concert with Royal Northern Sinfonia to be different again because “each orchestra has its own micro-culture, its own way of communicating.

“I see a symphony orchestra as a giant synthesiser, an endless world of colour to play with”

“I feel the Bowie symphonies haven’t been performed a lot, really,” he says, “but for me it’s slam dunk programming. These iconic names from different worlds are a really good entry point for people to come into the concert hall that wouldn’t normally.” Ames hopes the Sage Gateshead crowd will include Bowie, Glass and Eno fans as well as a classical audience, but insists the word “symphony” shouldn’t put contemporary pop fans off. “Pop has taken a lot from classical and vice versa,” he smiles. “I see a symphony orchestra as a giant synthesiser, an endless world of colour to play with. It should make for an incredible communal experience.”

Dave Simpson is a Guardian music critic and author of the books The Fallen, The Last Champions and Sex Pistols: I Wanna Be Me. His first David Bowie record was a 7” reissue of Space Oddity and when he was 11 he asked the barber for a Ziggy Stardust haircut, much to the horror of his mum.

Experience the music of David Bowie as you’ve never heard it before, reimagined and transformed into symphonies by minimalist composer Philip Glass.